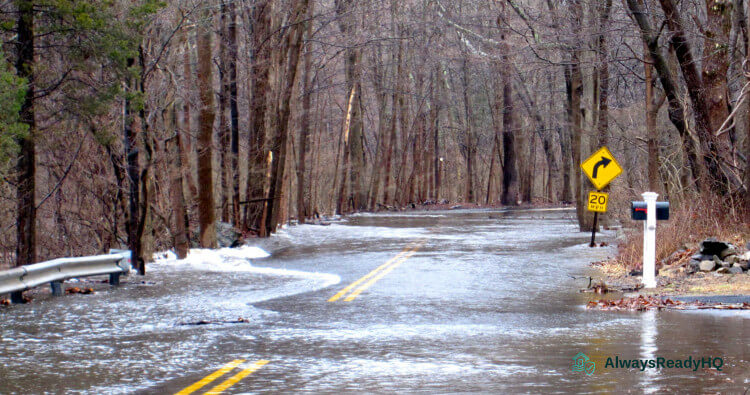 These disasters are not only dangerous for those affected but also costly for communities that need to rebuild after they do occur. The more you know about these disasters and how to prepare for them, the better equipped you will be when one occurs. Below we will explore what some of the most common types of natural disasters in Connecticut and what steps you should take before it happens so that you can stay safe during an event like this.

Drought is defined as an extreme lack of precipitation often caused by a shift in the climate pattern. Droughts are not uncommon to Connecticut which is why preparedness should be taken seriously. There are many different stages of droughts, the first being moderate drought which means there are above-normal levels of moisture but below-normal levels for this area. The next stage is severe drought, which has less than 25% of normal precipitation and lastly extreme drought which has less than 10% of normal precipitation. There can be other factors that could lead up to a drought which will affect whether or not the drought is moderate or severe so it's important to keep an eye out for any changes in the water supply. As a small state without a lot of agriculture, people in Connecticut will not directly be affected by a drought, but they can definitely feel its effects in the form of high prices and low supply at grocery stores.

Extreme heat is when temperatures reach up to or above 90 degrees Fahrenheit (32 degrees Celsius) for an extended period of time. Many people who live in Connecticut will tell you that summers are hot but due to the latitude, the state does not have the infrastructure or traditions to deal with heat in the way that southern or western states may have. However, the changing climate has led to many extreme weather patterns that are dangerous if proper precautions are not taken. These types of heat waves can lead to health problems including dehydration, exhaustion, and even death. The highest risk for heatwaves in Connecticut is simple lack of preparedness and availability of cooling opportunities (e.g., air conditioners, utility capacity, etc).

Connecticut and New England is not traditionally known for earthquakes and seismic activity like California. However, it does happen regularly - sometimes in frequent bursts. Finding ways to protect yourself and your family in the event of an earthquake in Connecticut is important in order to minimize damage, injury, and even death.

On May 16, 1791, the largest earthquake to shake Connecticut took place in Moodus, though it caused very little significant damage.

Connecticut is not known for flooding like other parts of the country are. Flooding can be caused by rain or melting snow, but most often it is the result of natural disasters like hurricanes and severe thunderstorms. Even if Connecticut does not typically see floods, they are still a potential risk to homeowners. However, there are some steps you can take to minimize your risk. If your house is in a low-lying area or on the coast, you should consider buying flood insurance or making sure that your home is elevated so that it will be less likely to flood when the water rises.

The worst recent flood occurred in 2007.

A severe spring nor'easter impacted the East Coast of the United States from April 15 to 18, 2007. Rainfall varied from 3 inches to more than 7 inches in Connecticut. The combined impact of significant rain over a short period, high winds, and high tides resulted in widespread flooding, storm damage, power outages, evacuations, and major disruptions to business and traffic.

Hurricanes have been known to have some impacts on Connecticut, but the state is typically safer from these kinds of natural disasters than states like Florida. In 2011, Hurricane Irene passed through close to Connecticut and caused a lot of damage as well as evacuation orders. It is important for people living in this area to prepare themselves ahead of time so that if a hurricane does come by, they will be able to survive without any injury.

The people in the area should make sure that they have things like food and water on hand in case a storm hits and there is a lack of supply distribution. Also, it's best to put together an evacuation plan & emergency kit (aka "bug out bag") ahead of time with your family so that everyone knows what they are supposed to do when something happens.

One of the more common causes of landslides and debris flow in Connecticut is an intense rainstorm coupled with precariously steep slopes. For this reason, some of the most vulnerable places are on the coastal plain. The vulnerability is enhanced by saturated ground conditions that might have been caused during a dry spell or due to too much groundwater extraction.

Another way debris flow can happen is if there are natural disasters like hurricanes or tornadoes. This would cause soil erosion which could lead to a landslide or debris flow.

It's important to know where you are living so you can take appropriate precautions before something happens so that you can prevent potential problems.

The 2,073-megawatt Millstone nuclear power station is located in Waterford and has two reactors. It began operations in 1970 and features two reactors. It is the only nuclear reactor in Connecticut in New England. However, as a small state, Connecticut is also vulnerable to nuclear incidents in neighboring states, such as the infamous Three Mile Island incident.

Even though there is a power plant very close to Connecticut, the state should not be too worried about nuclear disasters. Millstone has been supplying electricity for 40 years and has gone through extensive inspections from the Nuclear Regulatory Commission. Additionally, there have been no reports of problems at this facility as well as many other facilities across the United States.

Usually power outages are a consequence of a disaster, but as a major part of a major urban area, Connecticut is also vulnerable to a power outage that causes a disaster. As the New York area found out in 1965 and 2003, a power outage can be caused by mismanagement or equipment failure, but also by cyberattacks. No matter the cause, a power outage is a serious risk for Connecticut.

If you see people outside your house, make sure to be good neighbors and help each other out. If there is a disaster in the area that caused the power outage, the police might not know who belongs where, so it becomes everyone's responsibility to look out for their neighbors.

The most common type of severe weather in Connecticut is thunderstorms. The Northeast gets a frequency of about 20-30 days a year that have hail or thunderstorm warnings. Additionally Nor'Easters are a well-known risk to all of New England.

Thunderstorms usually occur across the entire state, but more on the western side of Connecticut.

While there isn't much you can do to prepare for a thunderstorm, it is important that if there is a warning and you hear thunder than you should seek shelter in a sturdy building.

There are several different types of tornadoes in Connecticut. Most commonly, they form along the coast, but there are also cases of them forming in inland areas. The state has about six to ten cases a year of tornado warnings. There is little you can do to prepare for a tornado other than seeking shelter when necessary. If you hear the weather sirens that means that it is time to seek shelter.

Winter storm events in Connecticut can bring a range of threats and hazards, from blizzard conditions to ice storms, heavy snowfall, coastal flooding, damaging winds, and significant precipitation. In recent years, however, these weather problems have been exacerbated by the effects of climate change. Because the winters are warmer than they used to be in Connecticut with less snowfall and more rain happening in winter storms. The overall amount of precipitation that has been seen over the past 100 years has risen by almost 18%. As a result, there is a greater likelihood for flooding during a severe winter storm with intense rain and wind impacting rivers and communities downstream.

Snowstorms frequently lead to power outages for days at a time in Connecticut. A major snowstorm in February 2011 knocked out power to more than 1 million people and resulted in record-breaking cold temperatures for the week.

Due to the variety of winter weather problems, Connecticut residents should know what they should do during a winter storm. People should have several days' worth of nonperishable food and water on hand in case they are kept indoors for several days. They should also have flashlights, batteries, and an AM/FM radio in case the power goes out for an extended period of time and emergency management agencies are strained.

In Connecticut, it is important to be prepared for a variety of natural disasters. The most common type of severe weather in Connecticut is thunderstorms and the Northeast gets about 20-30 days a year that have hail or thunderstorm warnings. Additionally Nor'Easters are well known risks to all of New England with winter storms bringing more problems like blizzard conditions, ice storms, heavy snowfall, coastal flooding, damaging winds and significant precipitation. Snowstorms also lead to power outages for days at a time which can result in record breaking cold temperatures if they happen during February (the month). While there isn't much you can do to prepare for some types of natural disasters like tornadoes other than seek shelter when necessary; It's always good emergency preparedness practice to have a few days' worth of nonperishable food and water on hand, flashlights, batteries and an AM/FM radio in case the power goes out for an extended period.