EEBDs (emergency escape breathing devices) are common in specific work environments. Escape hoods and escape respirators protect employees from occupational diseases. But having one at home is handy, too.

We’ve come to a place where we must expect the unexpected. Adding escape hoods to a family emergency plan or fire drill isn’t an overreaction; it’s just preparation.

Let’s look at precisely what escape hoods are and how you may find them helpful.

What is an escape hood? 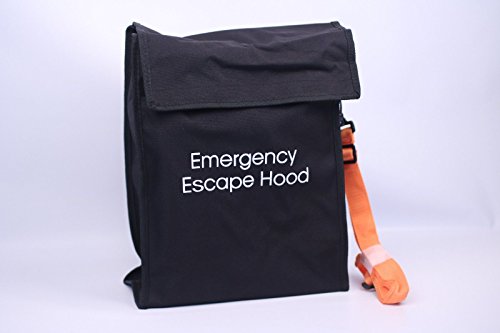 An escape hood, or escape respirator, is a form of protective gear. It minimizes exposure to certain dangerous substances.

What is an escape hood used for?

An escape hood will give you fifteen minutes to escape a dangerous situation. It is fifteen more minutes than you would have without one.

The respiratory-specific PPE will block chemicals from your eyes and skin and prevent you from inhaling damaging particles.

Oh, and an escape respirator gives you oxygen in situations where there is none or little.

Escape hoods are sometimes part of fire evacuation plans at work or school. During a fire emergency, every second is precious, which means going through drills. Everyone must understand when and how to use them.

The same goes for family fire drills. More practice means less chaos in the case of a catastrophe.

How do you wear an escape hood?

Always read and follow the instructions. Most escape hoods work pretty well the same, but unless you use them correctly, they are entirely useless.

When should escape respirators be used?

An Emergency Escape Hood Only Works If…

What are the cons of an escape hood?

You will find all sorts of EEBDs. Emergency escape hoods come with the most pros. But, like with everything, you should know a couple of things before investing in one.

What respirator is intended to be used only for an emergency exit?

Emergency escape hoods are only meant to get you out of a hairy situation. For instance, if a nuclear bomb just dropped, an escape-only respirator isn’t doing much to protect you from the fallout.

But an emergency-specific respirator will help you escape a raging housefire.

How long is an escape respirator good for?

The most basic form of an escape hood will give you an extra fifteen minutes in specific emergencies.

But you can find some that will last up to an hour. But remember that escape respirators are for one-time use and are super expensive.

Will an escape hood protect me if there is not enough oxygen in the air?

An escape hood is an emergency-only short-time solution. It only provides you with time; it will only give you fifteen or so minutes to get somewhere with sufficient air.